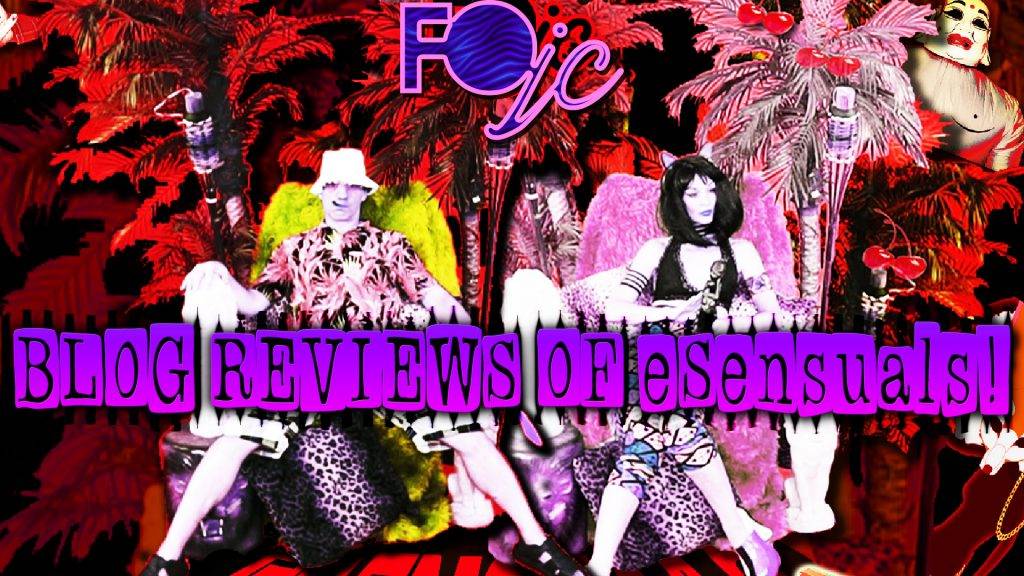 “The best of everything rolled into the only album you need.  The sound of the underground.”

“I thought when I discovered Prince I found the last great talent on the plant, I was wrong… you are awesome.”

“In short, the world is about to become fans of Fans of Jimmy Century.”

“…influences from the likes of Prince, Queen, Bowie and beyond…Great bands not only create great music, they create their own worlds. Welcome to the singular, extraordinary, stand out and stand apart world of Fans of Jimmy Century…astonishing and strikingly accomplished collection of musical style, idea and influence, and a testament to the dedication, passion and sacrifice required of the modern artist.”

“While descriptions can only do so much justice, they combine the sultry sensuality of Goldfrapp and Portishead, the sassy modern pop of St. Vincent and the quirky charm of pop’s great eccentric visionaries like Kate Bush.  Alicia Perrone’s charismatic vocals capture your attention immediately.”

“On “eSensuals” Fans of Jimmy Century create a virtual world of pure, uncut oddity, a brilliant tour-de-force that messes with listener expectations in the best possible way.”

“This music is further proof of their genius, but they know what they are, they’re just waiting for us to catch up.”

“From the moment the slinky “All My Friends Are Ice Queens”, kicks in, I found “eSensuals” to be a pretty astonishing mix of art, sensitivity, societal discourse and effervescent attitude….I was amazed, challenged, entertained.  I cannot express how great the album is.”

“Alicia Perrone has everything it takes to be a big female pop star.  Her voice can carry huge choruses, she’s able to remold her image at the drop of a coin, and she has a classically mischievous face attached to a double-take body. Musical anchorman Victor James brings plenty of glossy production and danceable thumps making sure Fans of Jimmy Century have plenty of show-stopping material on hand.”

Nowadays, it is hard to find an album where you don’t skip a track. This is one of those albums.”

“…huge range of genres, blends them together seamlessly and yet still manages to be commercial and catchy. It’s a testament to the talents of this gifted duo and will be particularly appreciated by pop lovers who are tired of the vanilla-flavoured modern pop that occupies the charts.”

“This duo is pow-wowing themselves to the front of the line. This kinda vogue is not to be told what to do, when and how, making this act a little renegade, somewhat dangerous, and if played smart, a force to be reckoned with. It’ll seduce you and tango you around the room like a wolf in hunt, like pretty lights, like fire it will burn you, and like dark-punk-bass it’ll drop you into the hood and bling you out of the galaxy.”

“…shockingly different reality. This is the world of FOJC. It’s a world of curly-haired Cubans, South-American brunettes and breakfasts at Tiffany’s…survival is everything. The atmosphere is international with cigarette smoke….All your friends are Ice-Queens and all your enemies are all of your fears!  I’d heard their song ‘All My Friends Are Ice Queens’ & just had to get them on the show. It’s a vaudevillian knocked-up satire of a song. It’s idolatrous & wicked & smells of witchcraft. Alicia’s vocal defeats you…Vic’s musical arrangement abandons you somewhere deep in the post-war underground sleaze-world of Berlin…you’ll never want to leave.”

Get To The Chorus Blog

“A highlight and true heart of the sound comes from the intense, powerful vocals. A sense of humor is infused into the album as well, ensuring that the lyricism takes front and center stage. The stylistic choices result in a great deal of genre bending. Ranging from elements of sleazy electro to nods to noir, everything about the album feels unexpected and alive.”

“Each track showcases the vocal of Alicia Perrone. Her vocal range is amazing. She can sing like an angel and also give this raw, deep from her soul vocals and doesn’t give you one type of sound.  The clarity of her voice, it’s hard to explain how amazing she is.”

“Lyrically, ‘they’ maintain the standard of slaying one-liners”

“So incredible it captivated us and sparked a new found interest in a genre that we rarely hear today!  Funky, electronic that makes you feel like you’re on a “musical high.”  With a vibrant resonance and idiosyncratic voice, FOJC projects a feeling of individualism and stands out in an overcrowded music troupe today.”

“Genre? Hell no… FOJC don’t conform & they won’t acquiesce. Theirs is a warped musical odyssey where boundaries are constantly pushed & conventions are just crushed. Want to understand FOJC? well if you do you’re really missing the whole point. New York Dolls | Sex Pistols | Blondie | The Strokes. It doesn’t really matter in the slightest.  Where’s the name from I asked them? “Well ’Jimmy Century’ sounded like some crazy cult leader recruiting devotees.”  And that pretty much sums it up.”

Get To The Chorus Blog

“Things I Like: Bands who don’t understand the term “generic boundaries” whose music defies pigeon-holing like no other. They bend everything from warped electronica, futuristic show tunes, dirge disco, accessible pop, hip-hop and even occasional rock muscle to their will and the result is as glorious as it is unpredictable.  If you could bottle and sell their exquisite music thought processes to other musicians looking for inspiration then you would make a fortune. The only thing is what the hell would you write on the label?”

“…brilliantly memorable, enjoyable and potentially timeless hooks and peaks. Fans Of Jimmy Century are an unmissable act right now, entertaining and interesting in equal parts. A live show is a must.”

“Ping your mum. Ping your Dog. Let your girlfriends know. Make sure your lover gets the note. 26th October. It’s all going to become real.”

“…the highly-gifted Fans of Jimmy Century showcase to us just why they are the act to follow in the world of music.”

“…tracks on eSensuals are memorable revealing the wit and creativity of the creators…finds the perfect balance between skill, aesthetics, humor, and the avant garde without ever coming across as pretentious or ego-driven.”

“Alicia Perrone, the ringleader, brings this level of energy that is explosive!  I love the confidence she displays in her every word.  The music videos are legendary! I couldn’t stop laughing!  Fans of Jimmy Century, I’m backing all the way up so I can make room to bow down to you.”

“Favourite Tracks: I don’t understand the question. There’s nothing to compare here. My mind has no say in this matter.  My body is possessed.”

“…you are transported to a smokey club in the underground sleaze world of post-war Berlin complete with James Bond-style characters, the kind that’s frequented by the type of people your mother warned you about, but like every inquisitive soul you can’t help but push that door ajar to explore just a little more and once in, you’ll never want to leave.”

“Fans of Jimmy Century’s release, ‘Ghosts of Paradise’, tiptoe stiletto-stalks an electro-pop-rock fusion of beat perfect, synth droplets, and dirty guitar gin ‘n’ sonics.  Perrone’s vocals…controlled, strike a pose, they vogue.  This is Perfect. Pop. Dirt.  Like a radio, forgotten, lost in the desert night, kissed back to life by glam-trash strip-tease lights.  We were somewhere around Barstow when Fans of Jimmy Century began to take hold.   ‘All My Friends Are Ice Queens’ is opulent swing, trapezed theatrics – a warped Broadway on L-S-DISCO …and it’s only for darlings & divas, don’t you know!’

“Urban chic? underground sleaze? punk sex? new wave electro? No, No they dont belong in any category, they change the sound as they see fit, they move the sounds to confuse. A warped musical journey that consistently pushes the boundaries, they have that courage to follow their own path, and that is what makes them so distinctive.”

“Madonna and Gaga would be impressed. So would the artist formerly known as Prince.”

Their music requires one to be a free soul, not only is it brilliant, but it serves up their audience awesome thrills.  When you listen to “eSensuals” it becomes less about fitting into a box and more about creating wild imaginations…to captivate listeners, a right direction for the duo.”

“If a cut from ‘eSensuals’ doesn’t end up on every playlist, I’m not sure anymore if curators can be trusted. ”

In terms of sound, Fans of Jimmy Century is the kind of band that uses genres as colors on a palette rather than as boxes to limit their own creativity. As a result, their music feels spontaneous, direct and forward-thinking. From the hypnotic grooves of classic Trip Hop, to the dream-like textures of Chill-wave, anything is possible. Think of an extended jam between Massive Attack and Flying Lotus… Project masterminds Alicia Perrone and Victor James set out to turn this project into an exciting media outlet, not only focusing on great music, but also on poignant visual elements.  If you are a fan of artists like St. Vincent, Big Wild, Big Gigantic, you will love this one.

“They have been releasing some extraordinary music…you will feel compelled to listen.”

“…you’re not ready for the endless creativity, imagination, wild sound, and straight-up fun this duo provides!”

“Back Your Punk *** Up!  The tagline that’s about to be heard round the world…and hashtagged to death!”

“’Best of My Generation (Johnny Rotten)’ is a Mad Max movie drag racer, if it were a car, Steve McQueen would drive it at top speed, through the streets of San Francisco.”

FOJC is definitely a cleverer dynamic than most popular artists of our time…both exciting and revelatory. Their music engaging and that’s the difference between songs you listen to every now and again and songs you listen to all the way through twenty times a day…a great melody, Fans of Jimmy Century have that in spades. The melodies are just magnificently beautiful.  FOJC songs are so well-crafted, you almost feel that you can eat them…visual Pop that sparkles and crackles with freshness.  There is nothing pretentious about them and I particularly love Alicia Perrone’s voice, one minute she comes off like a bubbly girl-next-door and the next, she sounds like a smoky seductress.”

This cut (“Best of My Generation Johnny Rotten”) is off the chain. It literally started off with a bang, and instantly woke my day up. I’m feeling her flow on top of the Rock. This cut rubbed me the right way so much that I started it over so I could sing along with it. ‘Man, I had this dream last light. I dreamt we just got outta prison…'”